Your Best Resource for Dry Eye and Macular Degeneration Education

Our sense of style has the potential to communicate aspects of our personality to each person we come in contact with. In recent years, we’ve seen a growing trend in wearing glasses for both vision assistance and fashion.

But deciding between frames can be a challenge. Which frames represent your personality best? Which will suggest the characteristics you’re yearning to embody? The shape of your frames can influence how others perceive your intelligence, credibility, attractiveness, and age, among other traits.

To aid your eyewear decisions, we surveyed over 900 Americans about how they perceived appearances of female and male models wearing either no glasses or one of the following five frame styles: browline, rectangular, round wire, oval plastic, and wayfarer. Continue reading to see what we learned. 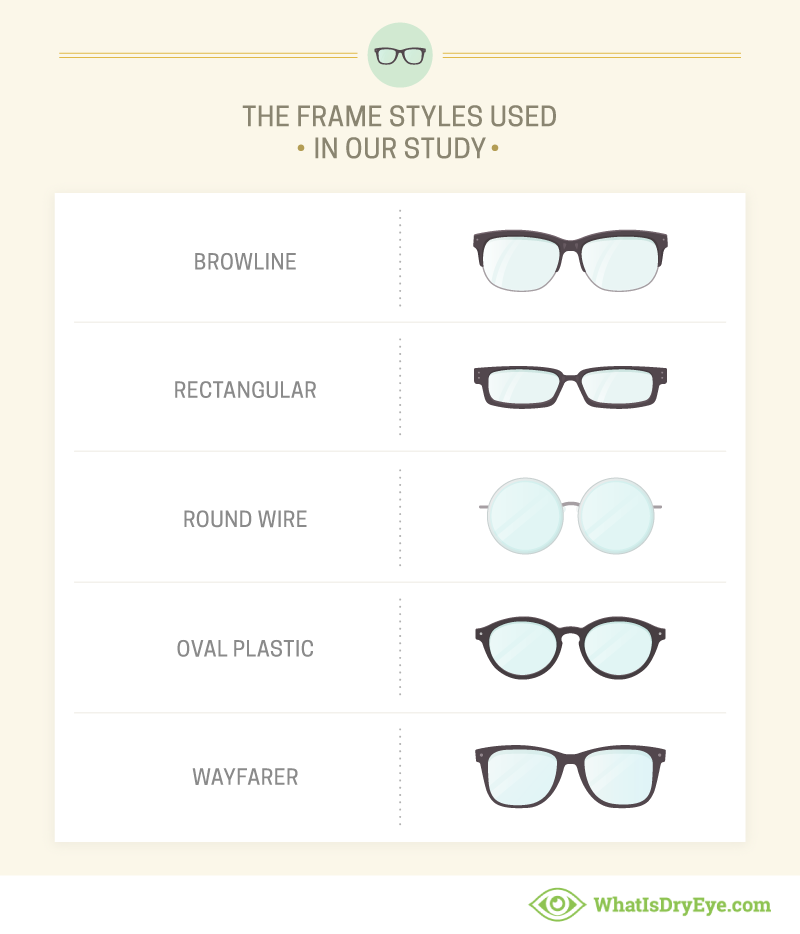 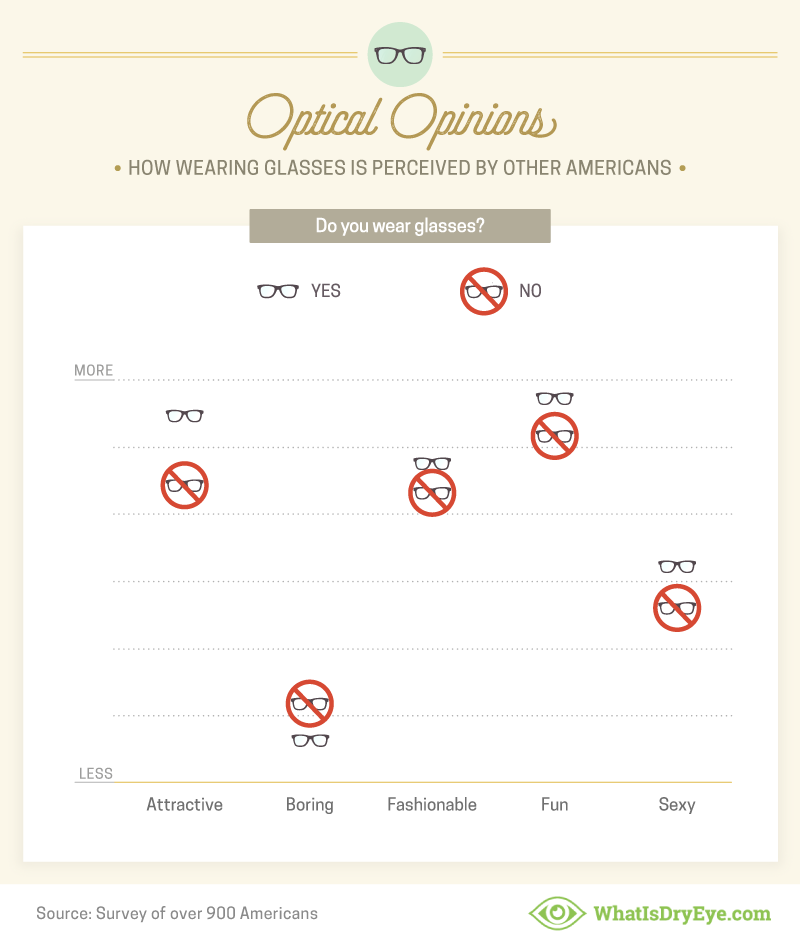 Glasses serve as a necessity for some and an accessory for others. Regardless of the reason for wearing or considering eyewear, surveyed Americans who wore glasses perceived other persons wearing glasses as more attractive, fashionable, and fun, and less boring than individuals who didn’t wear glasses.

The Specifics Behind the Specs 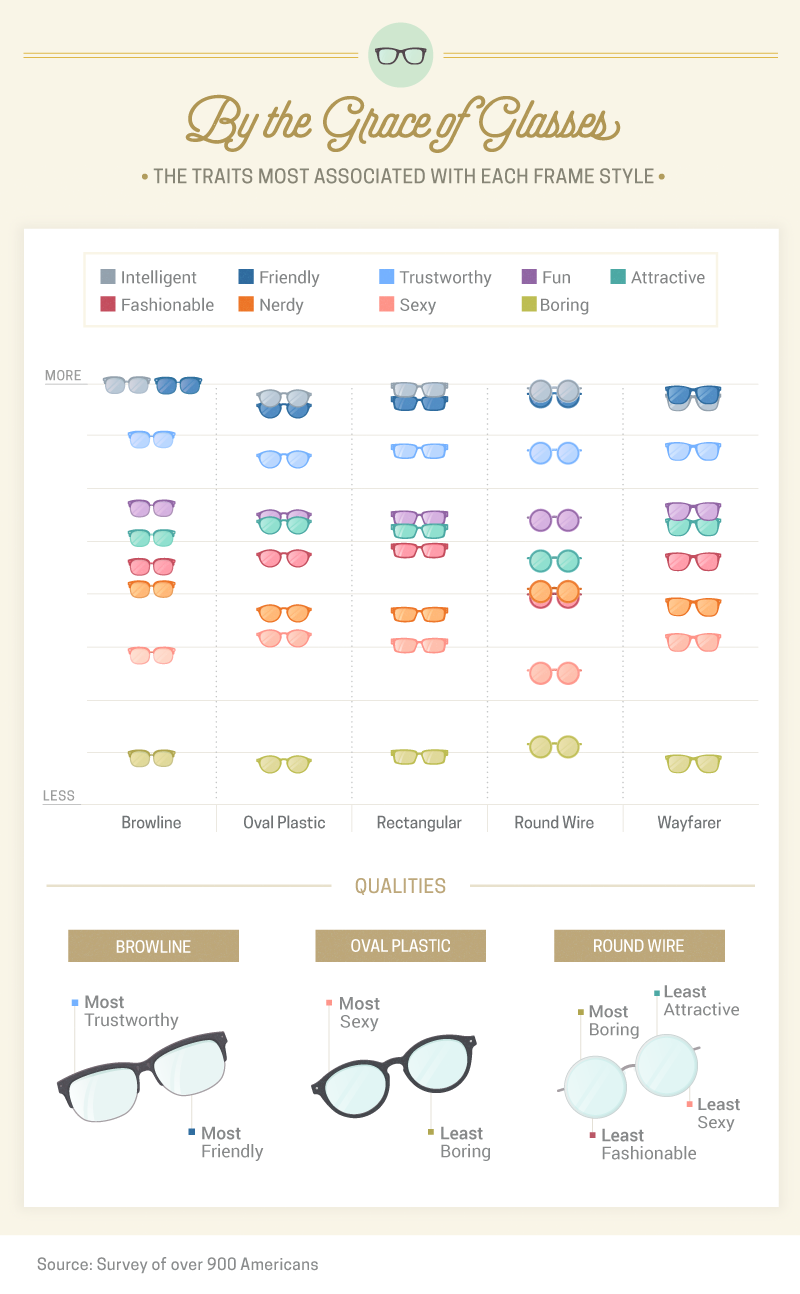 The frame you choose to sport is essential to the vibe you want to create. Are you aiming for sexy? Intelligent? Fun? Maybe being fashionable is at the top of your list. We asked survey participants to tell us what traits they most associated with each frame style.

If sexy is what you’re after, you may want to opt for oval plastic or wayfarer frames. Oval plastic frames were ranked most sexy, as well as least boring. Fun and sexy? A definite win-win.

If intelligence is what you hope to project, go for browline or rectangular frames. According to surveyed Americans, browline frames also had the potential to promote trustworthiness and friendliness. 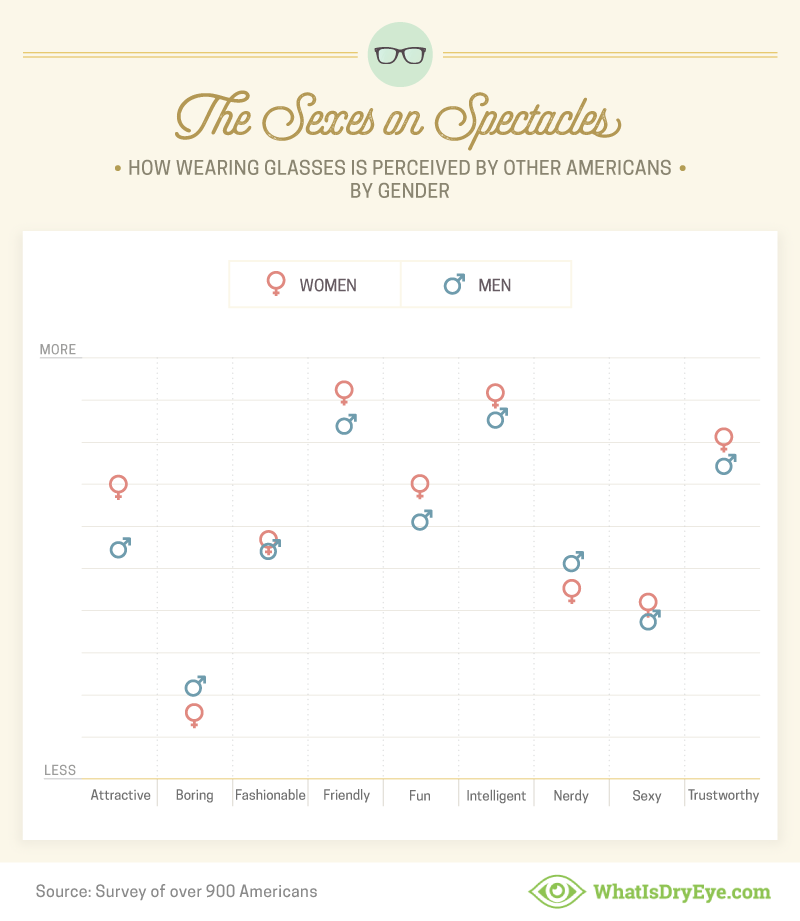 Gender may very well play a role in how others perceive you in glasses. 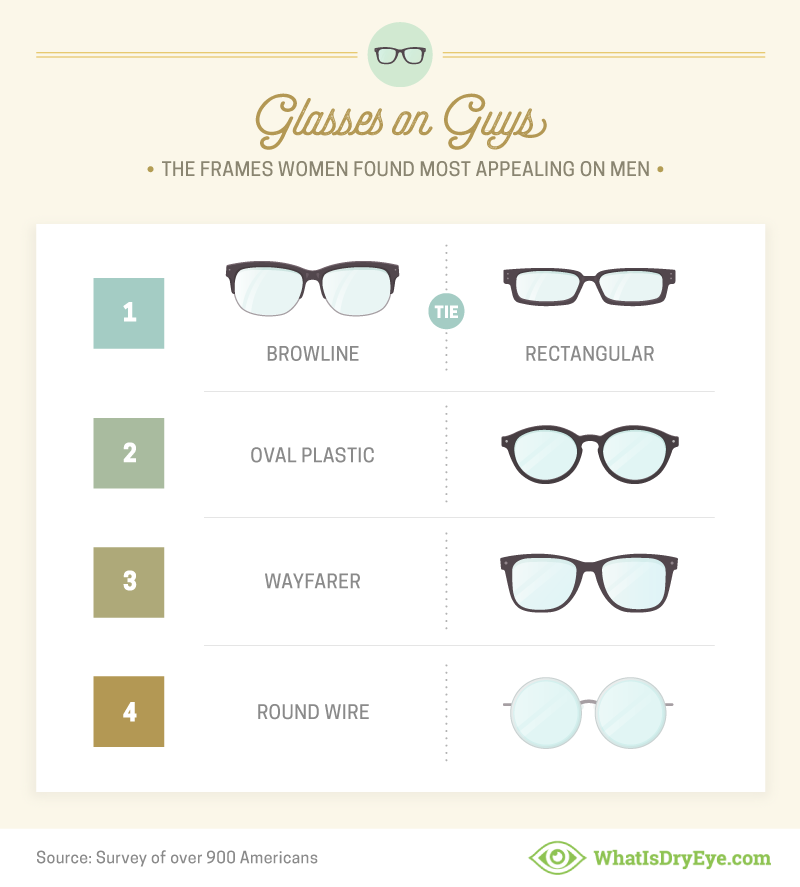 Men with glasses? Cue swooning. And GQ agrees – a solid pair of glasses can get a man noticed for being, as mentioned before, smart but also attractive.

Our survey results show women perceived men wearing browline and rectangular frames as more attractive, fashionable, fun, and sexy than other frames. Thinking about ditching those contacts and investing in a pair of glasses now?

Round wire frames were ranked the least appealing on men. Apparently, Harry Potter is the only man who can successfully don these frames. 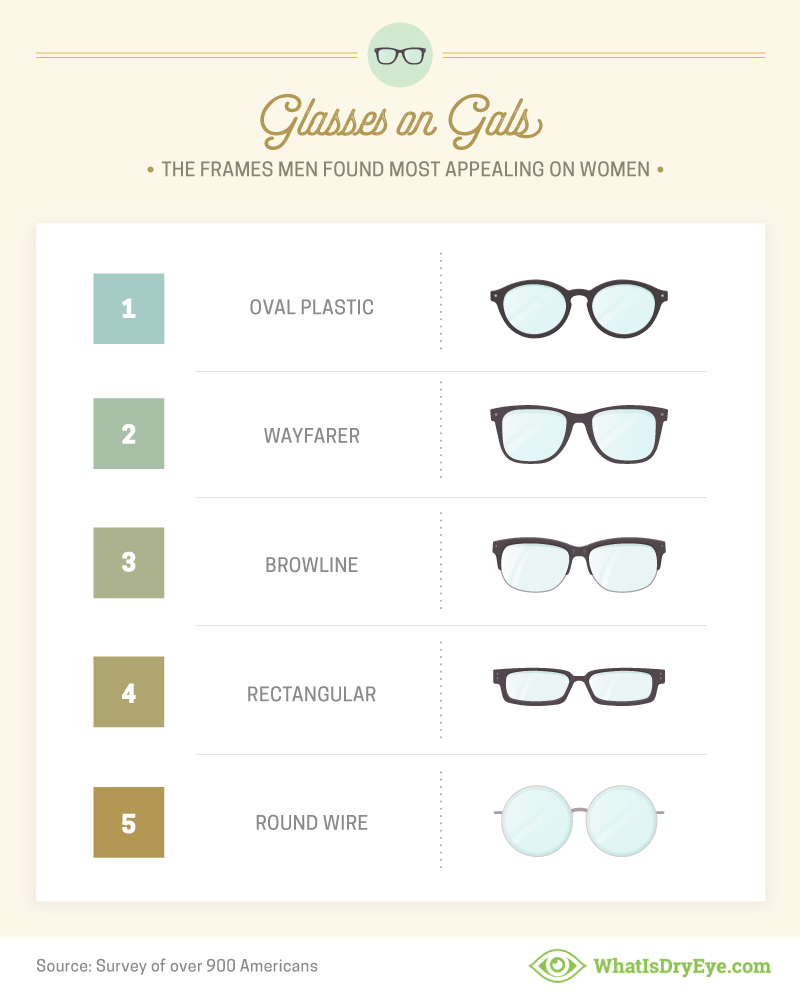 What comes to mind when you think of women and glasses? If you’re thinking geek chic, good! Right now, nerdy is so in.

According to surveyed men, women were most attractive, fashionable, fun, and sexy in oval plastic frames. Wayfarer frames pulled a close second, however.

A Look for the Ages 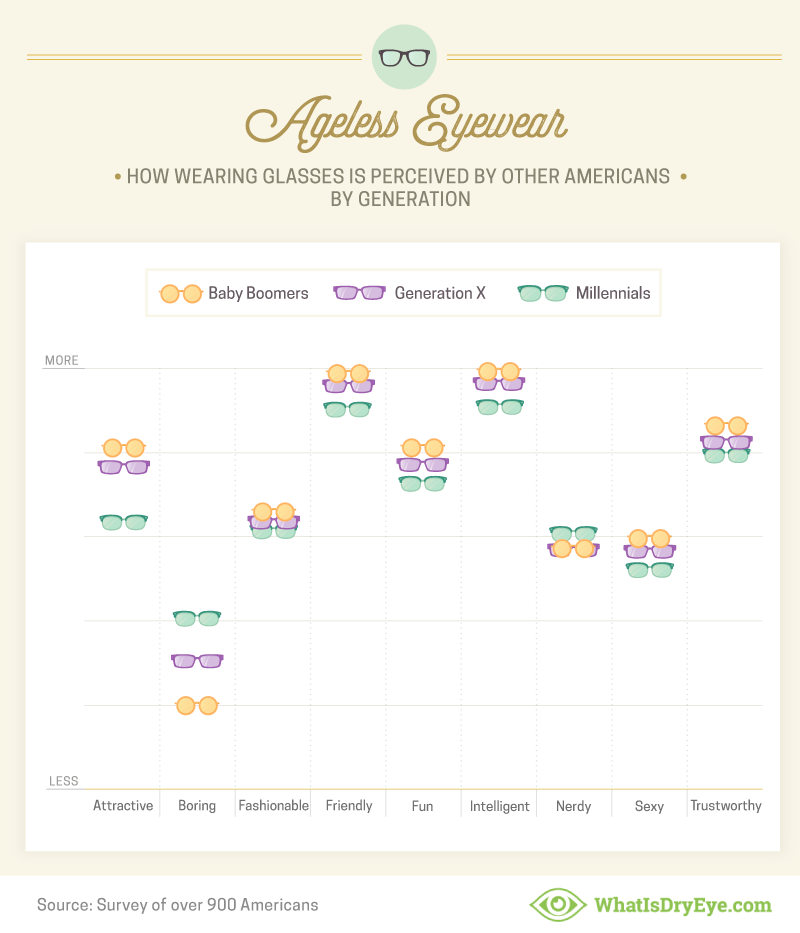 We separated survey participants into their three respective generations – baby boomers, Gen Xers, and millennials – to understand how each perceived glasses wearers.

For the Love of Lenses 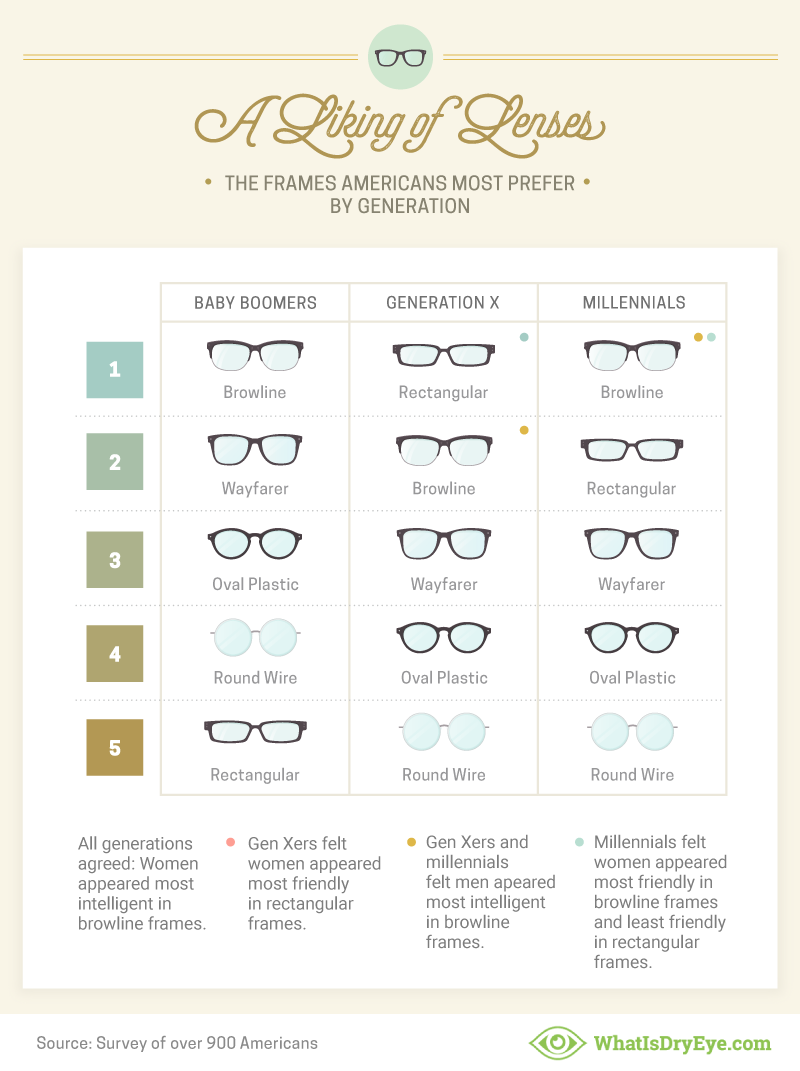 Rectangular frames were ranked high among Gen Xers and millennials, but baby boomers ranked these frames last in preference. In contrast, Gen Xers perceived women as most friendly in these frames, while millennials felt the opposite.

Round wire frames pulled in last place for Gen Xers and millennials, but model and actress Emily Ratajkowski exudes Allure’s definition of geek chic in her round frames. So they might be worth a shot after all.

Glasses are a solution for vision deficiencies; however, they also serve as a statement piece for many with perfect vision. No matter the reason for seeking a pair, glasses are a style choice with the potential to say a lot about who you are.

Invest in frames that resemble the true you. And while you’re at it, visit WhatIsDryEye.com to keep those eyes behind the frames as healthy and shining as possible.

We used image manipulation software to combine 10 stock photos of models with five common styles of eyeglass frames. Five women and five men of different races and ethnicities were chosen to model the frames. Survey respondents rated the appearance of each combination of model and frame, including the model without glasses. Each respondent was limited to 10 combinations of models and frames and was never shown the same model twice.

If you like the look of the images or research found on this page, feel free to use it on your own site for noncommercial purposes. All we ask is that you help us look good by linking back to this page to give credit to the study’s authors.